The multiparametric Magnetic Resonance Imaging (mpMRI) is the diagnostic milestone of this 2 last decades in the field of prostate cancer.

As MRI technology does not use X-Rays it is less invasive than a computerized tomography scan (CT scan). Instead MRI is based upon superconducting electromagnets which produce a field that causes the randomly spinning hydrogen particles (H2O being the most prominent molecule in the human body ≈ 60%) in each cells of the selected part of our body to all line up in a strong magnetic moment. However when a tissue is damaged, the atoms in that tissue remain unmatched and will not line up evenly as expected. When the magnet is turned off, the hydrogen atoms gradually return to their original position and as they do so, every hydrogen particle either in a normal or abnormal tissue emits a certain kind of energy. This energy is then detected by the a sensitive antenna, which transmits the data into the computer system in the form of signals. Finally, the computer system converts the signal into an image latter interpreted by a Radiologist. During the process of an MRI examination different sequences will be produced by the machine some of them need to be performed after a gadolinium injection which will enhance anatomical structures under certain technical conditions. Conversely to the CT scan where only transversal slides of the body are produced the MRI is able to give an image of the human body in every axis with mainly transversal [axial] (head to feet axis), sagittal (right to left axis) and coronal (front to rear axis) views.

For a prostate examination by mpMRI 3 sequences are needed : T2-weighted (T2W), diffusion weighted imaging (DWI) and Dynamic Contrast Enhanced (DCE). The acquisition of different sequences for the iconographic interpretation of the disease explains the multiparametric aspect of the MRI. The acquisition plan has to be the same for every sequence to be able to compare them. Usually a full mpMRI examination takes around 30-45 minutes. 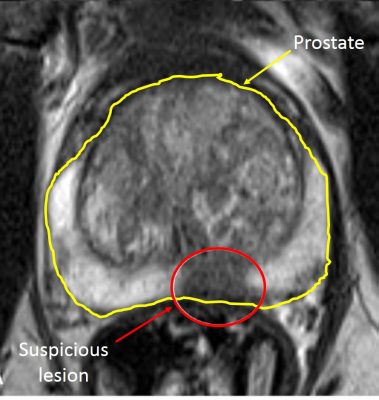 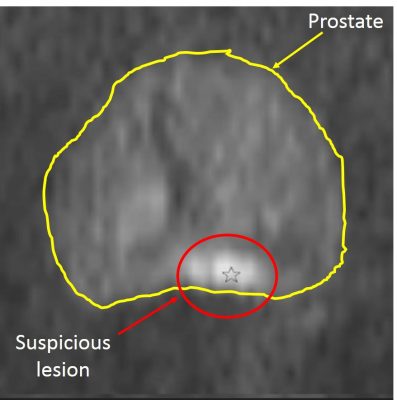 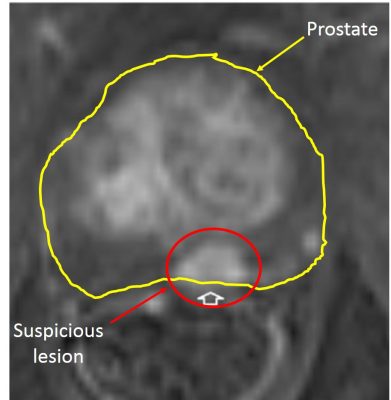 Based on the BI-RADS (Breast Imaging and Reporting Archiving Data System), The European Society of Urogenital Radiology (ESUR) developed a consensus-based guidelines for prostate mpMRI the PI-RADS. Depending on the location of the lesion peripheral or transitional the calculation of the PI-RADS score is different. The classification goes from 1 to 5 with 1 being the absence of lesion and 5 a highly suspicious lesion (Figure 2 and picture 22). In 2014, an update of the first version of the PI-RADS score has led to the PI-RADS v2. The more aggressive is the disease (higher ISUP score), the better is the detection rate even for small volume lesions (table 4). 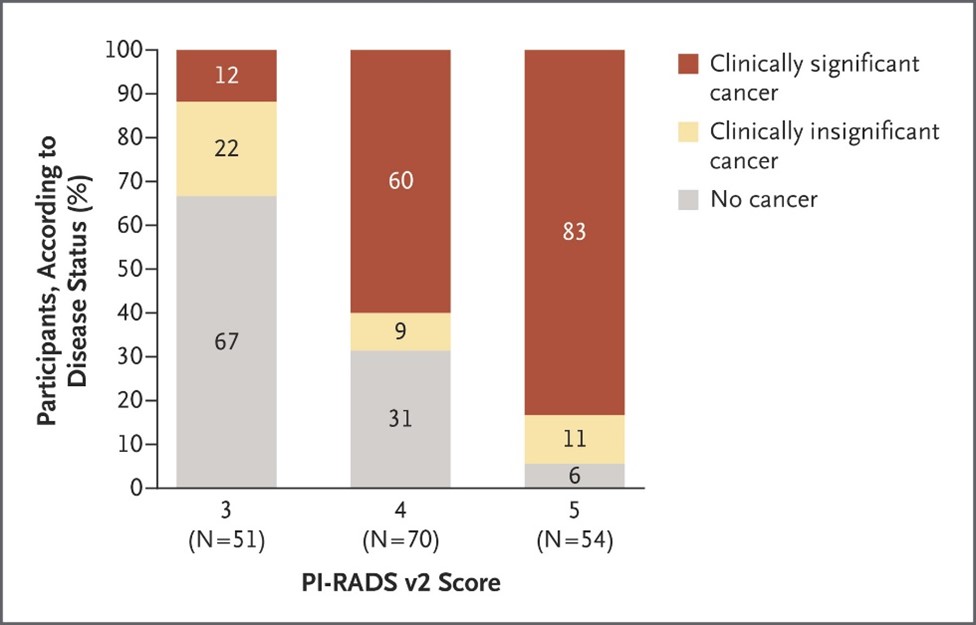 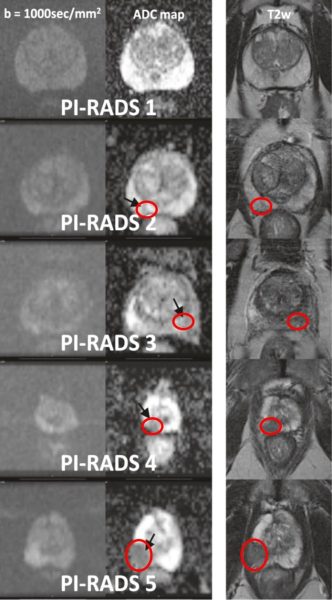 Through the past years the detection of prostate cancer by mpMRI has consistently increased (table 4) and the technological improvement such as the use of more powerful superconducting electromagnets allowing to move from a 1.5 to a 3 Tesla (3T) MRI proves that the technology will undoubtely overcome any present difficulty to detect even the smallest cancer with a frightening accuracy. In some centers a 7T MRI which gives for instance incredible high-quality cerebral pictures is already in use while a 10.5T MRI is evaluated in the research domain (picture 23). 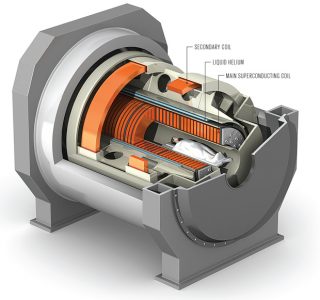 Picture 23 : A superconducting magnet with a spatial resolution of about 0.1 mm compared to 1 mm today