Prostate Cancer > The risk of overdiagnosis and overtreatment

In 2010, Pr R. Ablin, inventor of the PSA test in the 80’s, published the article « The Great Prostate Mistake » in The New-York Times where he regretted his invention [3]. He wrote : « I never dreamed that my discovery four decades ago would lead to such a profit-driven public health disaster. The medical community must confront reality and stop the inappropriate use of P.S.A. screening. Doing so would save billions of dollars and rescue millions of men from unnecessary, debilitating treatments ». His opinion is very close to the « Primum non nocere » of Hippocrate (picture 12). Other voices also are strongly fighting against a certain radical management of prostate cancer. For instance in France the Association « Touche pas à ma prostate » (Keep my prostate alone) does not see the interest of diagnosing a disease which will kill so few in proportion. Indeed less than 5 out of 100 men will die from his prostate cancer. 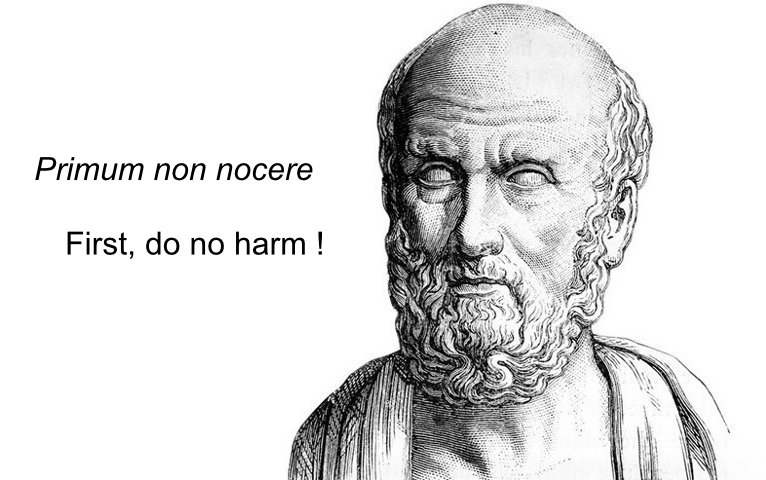 The reality of overtreatment

Unfortunately worldwide overtreatment is a reality regarding the management of prostate cancer. In very interesting article published few years ago in JAMA by the San Francisco VA Medical Center and University of California on a population of 300 000 men, the study team found that 75% of men with an age of 85 and above were treated when diagnosed with prostate whatever the agressivity of the disease or their other medical conditions [4]. The right to know for every man if he has or not a prostate cancer should never lead to such situation and more than ever a less aggressive therapeutic management is absolutely needed.

On the other hand the deaths toll regarding prostate cancer in Europe and in the USA are for 2020 respectively 78 800 and 33 330 men which represents roughly one out of ten men dying from a cancer [5, 6]. In the 20 coming years these number will increase respectively of 60 to 100% [6]. But above all even if most of patients having a prostate cancer will not die from it, in a significant proportion of them the disease will progress and make them ill for many years as more and more prostate cancer is described as a chronic disease. As prostate cancer early presentation is predominantly an asymptomatic disease, the right answer is to afford to any man willing to know to have access to an individual screening test by performing a PSA and a DRE. In case of a risk of prostate cancer the diagnosis workup has to be as accurate as possible as it presents the cornerstone to an optimal prostate cancer management. The difference between a prostate cancer expert institution and a standard center does not lay in the way you are treated but rather how accurate your diagnosis is in order to choose the treatment which fits you best.

Few data are needed to understand better the important place of prostate cancer in the large spectrum of cancers.
Learn More

For decades the diagnostic of prostate cancer has relied on a triad based on a clinical examination by digital rectal examination (DRE)...
Learn More

The multiparametric Magnetic Imaging Resonance is the diagnostic milestone of this 2 last decades.
Learn More