The following treatments are used either to potentialize curative strategies most often combined with radiotherapy as a part of multimodal treatment or more often as a palliative option at a later stage of the disease. Unless hormone therapy and mitoxantrone, the other strategies are based on scientific evidence regarding the impact on survival (picture 72). These so-called systemic treatments differ from localized treatments because they act and spread throughout the body whereas curative or palliative localized treatments act by physical action (surgical ablation, radiation or i.e. laser) on a defined target.

Androgen deprivation therapy (ADT) in prostate cancer is the oldest systemic treatment available in the field of prostate cancer. It was published by C. Huggins in 1941 and won him the Nobel Prize for Medicine in 1966 (picture 73). It is based on hormone dependance of prostate cancer, where androgens are a vital fuel for the growth and progression of cancer cells. In male, androgens are produced by the testis for 95% and by the adrenal glands for the remaining 5%. The production of testosterone depends on the hypothalamus-pituitary gland axis, the former producing the luteinizing hormone-releasing hormone (LH-RH) which will induce the production of luteinizing hormone (LH) by the latter. LH stimulates the production of androgens by the testicles [Leydig cells] (picture 74). The hypothalamus controls the pituitary gland by intermittent secretions of LH-RH.

For a long time ADT was achieved only surgically by bilateral ablation of the testis (orchiectomy). Later in 1980 the first LH-RH (also called GnRH) agonist (i.e. leuprolide, goserelin or triptorelin) was used to obtain a chemical castration. The effect of the intramuscular injection lasted first 1 month then 3 months to reach 6 months after 2000. It could appear weird to inject an LH-RH agonist which naturally stimulates the production of androgens by the testis to obtain a hormonal deprivation. However the trick lies in the natural intermittent hypothalamic rythm of secretion of LH-RH which is completely broken by the injection and the continual diffusion of LH-RH instead. Beside the usual side-effects such as hot flashes, major sexual function impact, loss of muscle mass and fatigue, one of the disadvantage of LH-RH agonists is the flair-up at the initiation of the treatment. Indeed during the 2-3 first weeks the injection will rather increase the production of testosterone with a possible clinical progression of the disease. Usually to avoid the flair-up effect a complementary hormone treatment is given by adding anti-androgens (i.e. bicalutamide or flutamide) for the same period of time.

Picture 73 : Publication princeps of C. Huggins and C.V. Hodges in Cancer Research in 1941 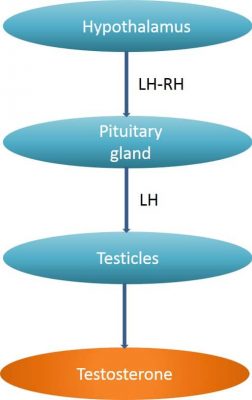 Another way to avoid the flair-up effect is to use an LH-RH antagonist rather than an agonist. However it is only in 2008 that the first LH-RH antagonist (degarelix) was approved. For galenic reasons, it needs a monthly injection.

Hormone therapy are mainly use as a first step of a palliative strategy to reduce the progression of the disease with usually a good impact on the presence of metastasis. Most often prostate tends to be hormone-sensitive (HSPC) which means that at this stage the disease is responsive to ADT. After a certain period of time prostate cancer become hormone resistant (CRPC = castration resistant prostate cancer). At this late stage hormone therapy is less or no efficient and other systemic treatment are needed to prevent the progression of the cancer. However while the cancer becomes hormone resistant and despite very little scientific evidences ADT is never discontinued. More recently hormone therapy has been included in multimodal strategies in combination with external beam radiation therapy in the so-called Bolla protocol. This multimodal strategy is based on the synergy between the biological effect of the hormone therapy and the physical effect of the radiation on cancerous prostatic cells (see Validated therapy – External Beam Radiation Therapy).

The last innovation in the hormone therapy field for prostate cancer is the perspective of the oral LH-RH antagonist « relugolix » which bears the advantage to stop quickly the therapy if needed.

If we exclude mitoxantrone which had no impact on survival in late stage prostate cancer, it was not before 2004 that chemotherapy became a validated treatment in the prostatic cancer field. Up to this period they were no Oncologist involved in the field of prostate cancer were the Urologists used to take care of their patients from a very early until late and metastatic stages. The first use of chemotherapy in prostate cancer was aimed at CRPC patients. In prostate cancer, chemotherapy is always given intraveinously and often needs the placement of a port a catheter which is a small medical device under the skin of the right chest (picture 75). 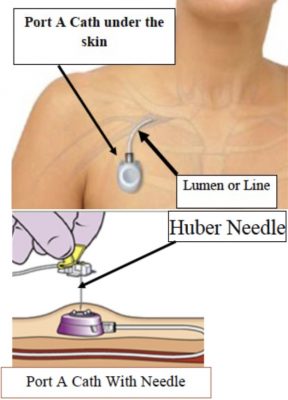 Picture 75 : port a catheter on the right breast

The first approved chemotherapy in metastatic cancer was docetaxel which shows in TAX327 a modest 2.5 months improvement in overall survival [37]. Then in 2010, cabazitaxel also from the taxane family was approved, also slightly increasing survival (2.4 months) [38]. Subsequently, docetaxel was evaluated in HSPC patients, showing a better improvement in survival reaching almost 14 months compared to ADT alone. For high-volume diseases, the difference in survival was even higher greater at 17 months [39].

Regarding chemotherapy both docetaxel and cabazitaxel are in use either as second line when a HSPC becomes hormone resistant or even in first line in HSPC when a high volume cancer is considered.

Two new molecules represent the new hormone therapies for advanced prostate cancer, abiraterone acetate and enzalutamide, approved respectively in 2011 and 2013 respectively (pictures 76-77). Abiraterone has a strong action on the androgen receptor (AR) and enzalutamide inhibits CYP-17, an enzyme required for androgens synthesis. These novel androgen therapies are indicated for the first and second-line metastatic CRPC patients following chemotherapy [40-43]. When one of this two treatments fails, the other responds poorly. 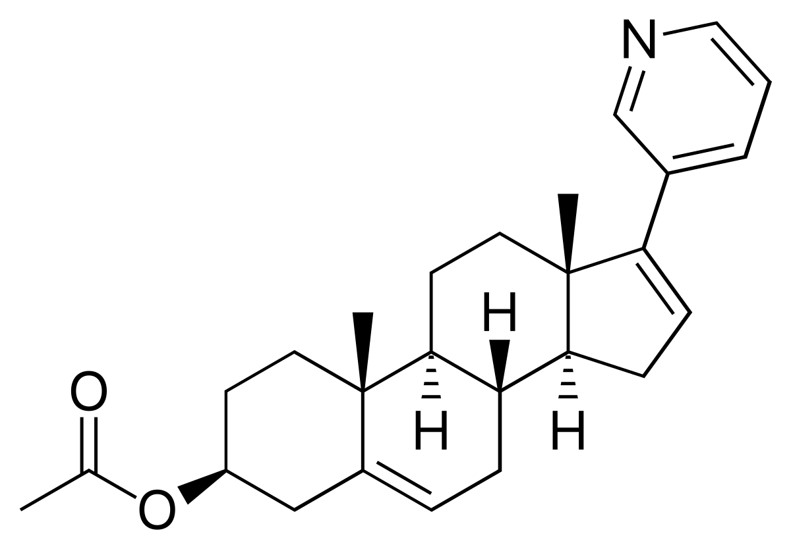 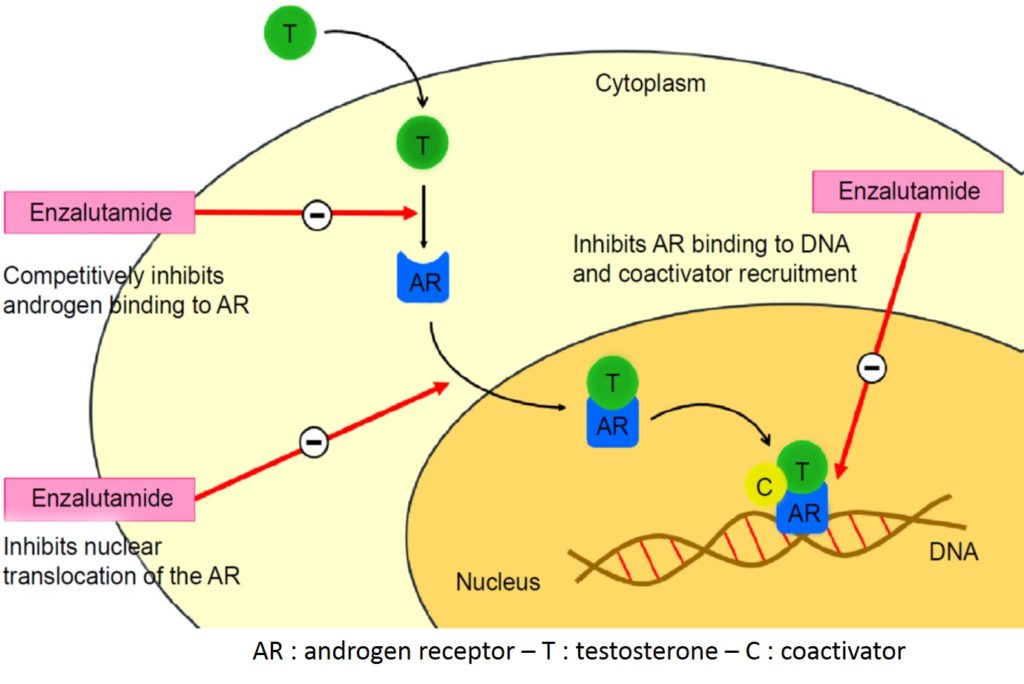 Cancerous cells present many dysfunctions amongst them genetic abnormalities. Normal and even cancerous cells are able through a DNA mismatch repair system (MMR) to bring a DNA damage response which keeps the cells alive. The PARP inhibitors blocks the MMR system leading to cell death so-called apoptosis. In the field of advanced prostate cancer Olaparib is the best known molecule and has been approved in 2020 first in The US and latter in Europe (picture 78). It is used in selected patients with mutated genes (i.e. BRCA1/2) of the DNA repair mechanism. It is assumed that 10-12% of metastatic prostate cancer patients inherited a germline DNA repair mutation. Olaparib is indicated in metastatic CRPC patients after failure of enzalutamide and/or abiraterone acetate|44]. 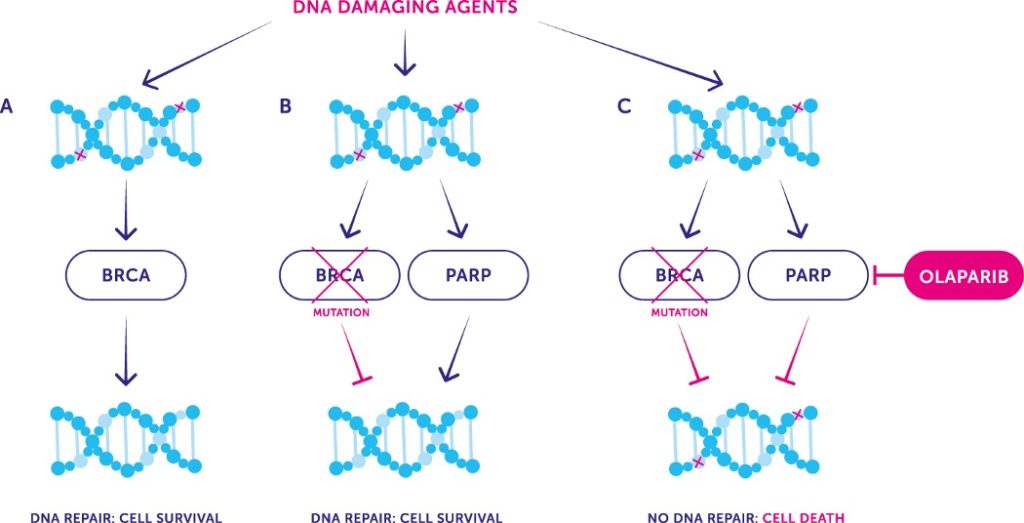 Immunotherapy is a therapeutic oncological approach that aims which aims to boost the immune system in order to kill cancerous cells. It acts mainly on maintaining immune cells (T cells) specialized in the destruction of cancerous cells.

Pembrolizumab is a monoclonal antibody that also targets the MMR system like Olaparib but in a different way. Indeed, cancers cells have the ability to produce ligands (PD-L1 [program death ligand 1] and PD-L2) that bind to the immune T-cells receptor to inactive them. By binding to the receptor, the PD-L1 and PD-L2 ligands block the T cells immune response that are normally programmed to kill the cancer cells (picture 79). Pembrolizumab competes with PD-L1 and PD-L2 with a greater affinity for the PD1 receptor. Thus, pembrolizumab helps to restore the T-cell immune response (picture 80). In 2017 Pembrolizumab has been approved for selected metastatic CRPC patients with mutations in the MMR system. 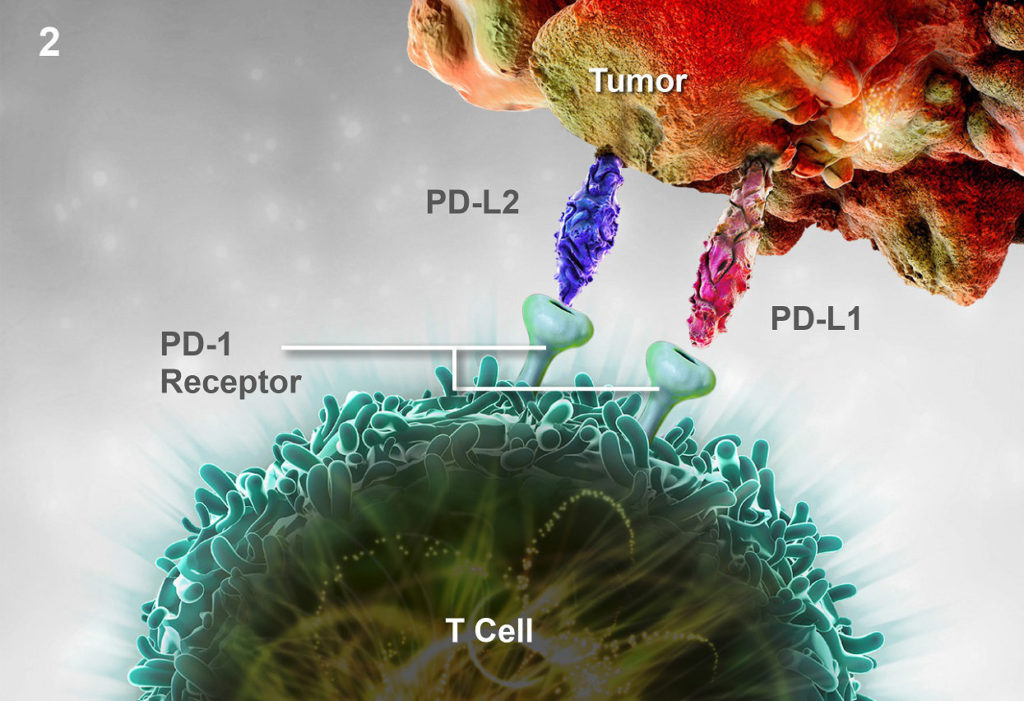 Picture 79 : Inactivation of a T-cell by PD-L1 and PD-L2 ligand binding to PD-1 receptor (source : www.keytrudahcp.com) 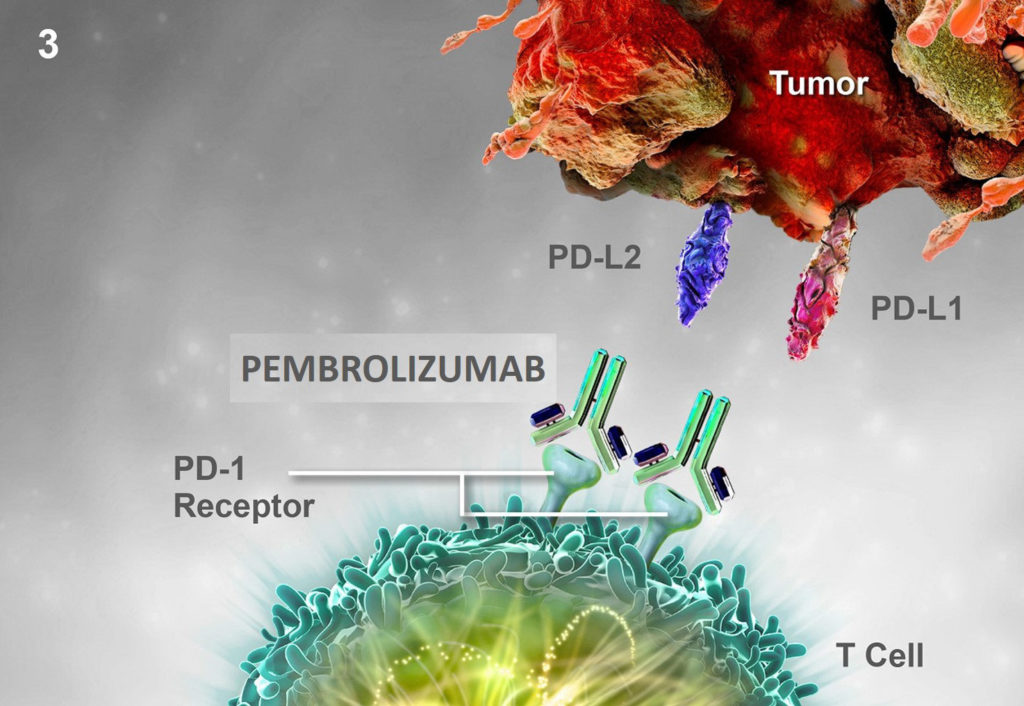 Picture 80 : Competitive binding of pembrolizumab on the PD-1 receptor blocking the interaction with PD-L1 and PD-L2 and restoring the T-cell immune response (source : www.keytrudahcp.com)

Sipuleucel-T is a vaccine that aims to stimulate the immune response of T-cells against prostatic acid phosphatase (PAP), a molecule produced in large quantities by the prostatic prostate cells. Precursors of antigen-presenting cell are combined with PAP to produce activated presenting antigen cells. Once injected, these cells activate T-cells to trigger an immune response targeted to the PAP against prostate cancer cells. Sipuleucel-T was approved by the FDA in 2010 and is indicated in asymptomatic or minimally symptomatic patients with metastatic CRPC (picture 81). 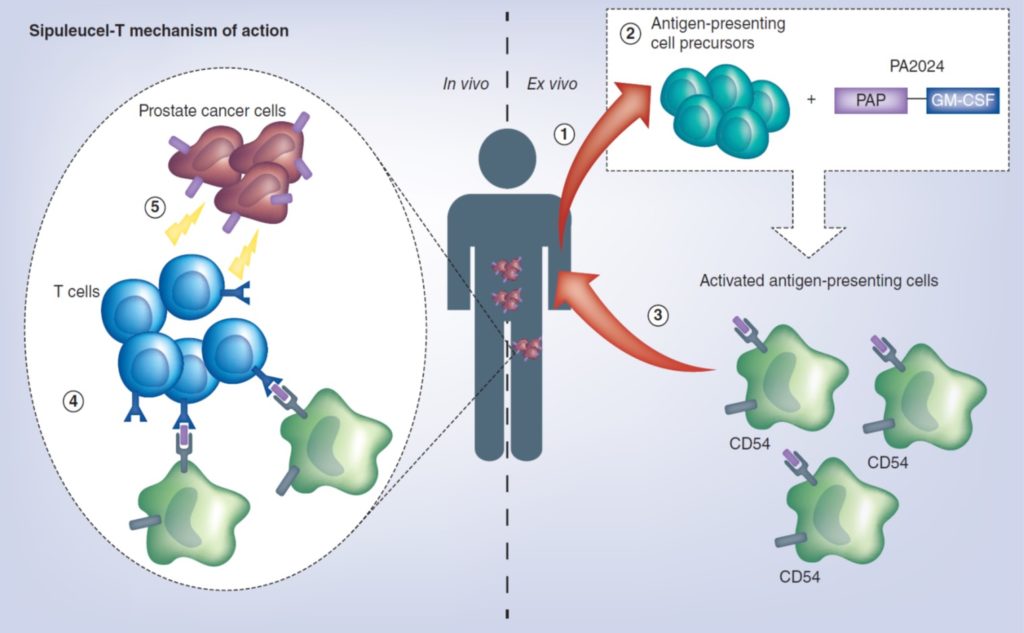